WhatsApp already allows you to silence the notifications of any chat forever: this is how it is done

Popular messaging application, WhatsApp, has now finally released its much-awaited feature for its users, where one can finally silence or mute their chats indefinitely. WhatsApp’s “Always Mute” option is now available on both iOS and Android versions of the app.

The Facebook-owned messaging app has been in the works to roll out a stable release for quite some time now as news about it working on several beta version floated around. On Friday, the company officially announced the stable release of the “Always Mute” feature on Twitter, which can be seen as an option along with the 8 hours and one week options for muting a chat.
The ‘Always Mute’ option is self-explanatory as it essentially replaces the time limit for muting a particular chat or a group. With the release of the feature, users can now mute a chat indefinitely instead of the maximum limit of 1 year. This is a blessing in disguise for all those annoying chats that you never want to indulge with but would feel too rude to block. 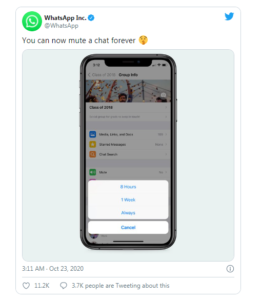 Enabling the ‘Always Mute’ option is pretty simple. For Android users, you need to go to WhatsApp and then open the chat you want to mute. After that, click on the three buttons on the top right corner of the chat head and select “Mute Notifications.” You can then choose the time duration that you want to mute a particular chat or group from the three options available: 8 hours, 1 week or Always.

For iOS users, go to the chat you want to mute, select the chat head and then tap on the Mute option. Select the time duration according to your need.

The Mute notifications have one more interesting feature to it. The Android version of the app also gives you an option to “Show Notifications” even after you mute it. This means that albeit the chat will be muted and no pop-up notification will show on the screen, the message will still show on the drop-down menu of the main notification panel of Android phones. This facility is, however, not available for iPhone users as no such message reflects after enabling the mute option on iOS.

Zoom puts an end to the “zoombombing” by paying $ 85 million

iOS 15 update will support iPhone 7 and above

Google’s foldable Pixel is coming in 2022

Retweet is back to how it was before

Will iPhone 13 battery be smaller than iPhone 12 battery?